BNO A Radiant Past . . . A Brilliant Future 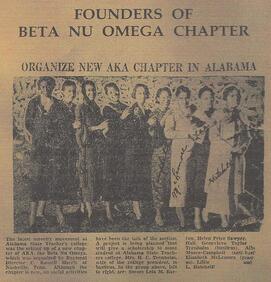 Beta Nu Omega Chapter was chartered by six dynamic women, Helen Price Sawyer Braxton, Ollie Lee Brown, Albertine Moore Campbell, Mary Hatchett Goldsmith, Portia Lee Trenholm, and Elizabeth Julian McLemore White, who envisioned a graduate chapter in Montgomery, Alabama. Under their leadership and with the support of other pioneers, Beta Nu Omega was chartered on June 13, 1936, on the campus of the institution now known as Alabama State University in Montgomery, AL.  Campbell, Trenholm and White were transferees, the others were the chapter’s first initiates.  BNO is in the South Eastern Region.

The Chapter’s initial focus was “Service to all Mankind.” Its first project was to establish an annual scholarship to honor high scholastic achievement of freshman female honor students attending Alabama State Teachers College.  At the College’s Spring 1937 Honors Day, BNO was the only Greek letter organization to award a twenty-five-dollar scholarship, thereby successfully completing a venture that still endures.  From 1937 through the fall of 1938, BNO aspired to charter an undergraduate chapter on the campus of Alabama State Teachers College.  At the 1936 Boule in Louisville, Kentucky, BNO was permitted to establish the Ivyette Club. Permission to charter the Beta Pi Chapter was granted at the 1937 Boule. Subsequently, BNO chartered two undergraduate chapters, Nu Xi at Auburn University Montgomery (1980) and Rho Chi at Huntingdon College (1999).
Over the Chapter’s 86 years, BNO has supported programs such as the Ivy Leaguers girls’ softball team, daily delivery of meals through MACOA, local women’s and men’s shelters, Joy for Life Foundation initiatives, opportunities for youth to explore the arts, and high school students’ realizations of their dreams through annual scholarships.  The Chapter’s signature programs have been the Fashionetta Experience, the Ebony Fashion Fair, the Kentucky Derby at Ivy Downs, and many Walks for a Cause events.
Four honorary members recommended by BNO were Johnnie R. Carr (2002), Virginia Foster Durr (1988), Hazel L. Harrison (1923), and Rosa Louise Parks (1988). BNO has identified over 15 physical venues, monuments and markers named for BNO leaders in Montgomery’s historic birthplace of the civil rights movement, which are included in the 2018 Boule Monuments Exhibit.  BNO held its Diamond Celebration, “Celebrating 75 Years of Service” in 2011 and is anticipating its Centennial Celebration in 2036.  From BNO ranks have come two regional directors, Portia Lee Trenholm and Reva White Allman; multiple chairman and co-chairman of regional conferences, cluster coordinators and other International and Regional committee members.
In 1989, the Chapter purchased a building which was later transferred to a Foundation, and again in 2021 BNO celebrated the opening of the Ivy Centre, a 10,000 sq. ft. structure which houses the operations of the Foundation as well as both Graduate and Undergraduate Chapters.  Under continued outstanding leadership, the chapter has grown from six charter members to 280+ members. BNOs unequivocal determination to be a service to all mankind has led the chapter to receive a variety of chapter and individual awards, honors and recognitions.